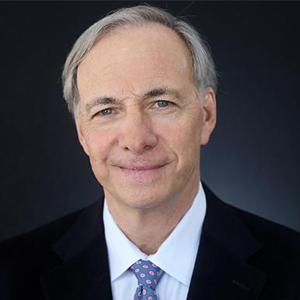 Ray Dalio is the Founder, Co-Chief Investment Officer and Co-Chairman of Bridgewater Associates, a global macro investment firm and the world’s largest hedge fund. Ray is the author of the #1 New York Times Bestseller, Principles: Life & Work, which shares the unique principles behind his and Bridgewater’s success.

Ray started Bridgewater over 40 years ago out of his two-bedroom apartment in New York and has been a global macro investor for nearly 50 years.

While at Bridgewater his industry-changing approaches to investing — which include the invention of risk parity, currency overlay, portable alpha and global inflation indexed bond management — prompted Chief Investment Officer magazine to write an article entitled “Is Ray Dalio the Steve Jobs of Investing?,” which compared his industry-changing inventions to those of the Apple founder. According to an industry study, Bridgewater’s hedge fund has made more money for its investors than any other hedge fund ever — an estimated $49.7 billion. Bridgewater Associates has received numerous awards, including over twenty “Manager of the Year” awards from every major financial publication, and Ray has received three “Lifetime Achievement” awards. Additionally, a long list of economic policymakers actively seek his advice, which prompted Time Magazine in 2012 to name him “One of the 100 Most Influential People in the World”.

Ray is an active philanthropist with a particular interest in oceanographic research and conservation. He is a participant in The Giving Pledge, a commitment to give more than half of his wealth to charity.

Ray believes that reality works like a machine and that principles for dealing with reality are required to be successful.